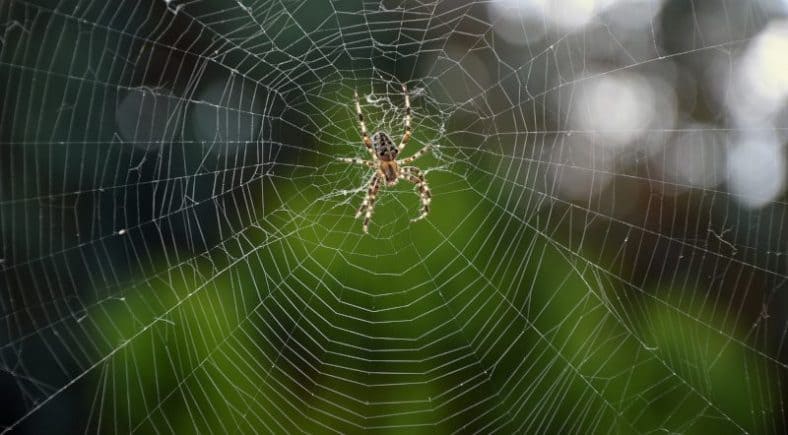 Did you dream about spiders recently? Dreaming about spiders is a common thing. Seeing them in a dream can have many meanings. Many people despise spiders, they think it is a bad omen. However, spiders don’t symbolize a bad thing in all cultures.

Dreaming about spiders can have both positive and negative meanings. Spiders weaving webs can be positive symbolizing craftiness, creativity and patience when you are close to completing a goal. They can also mean you feel you’re being manipulated by someone and you feel trapped.

Spiders are considered as creators since they can craft fine webs. Generally, it is the female spiders that build the web. They are larger and hold more poison in their sac. As a result, spiders are addressed as feminine creatures. The male is also able to create webs, but the spider webs are only for sperm induction and courting. They are not web builders like the female spider.

In other cultures, the eight legs of the spider represent infinite ideas of creativity. So, if you see a spider in your dream you should not jump to bad conclusions. Seeing a spider in a dream can be a good thing as well.

Meaning of Dreams About Spiders

You might find it crazy to think that seeing something in the dream could have a meaning in your life. But our spider dreams do have meanings. Everything that happens around us is recorded in the subconscious mind.

Normally, these are not noticed by us, but the information is collected and stored in the subconscious mind. Sometimes the brain shares this information with us as dreams.

Spiders have many different meanings. There are both bad and good meaning to spider. Some of the meanings are shared here to understand them better. 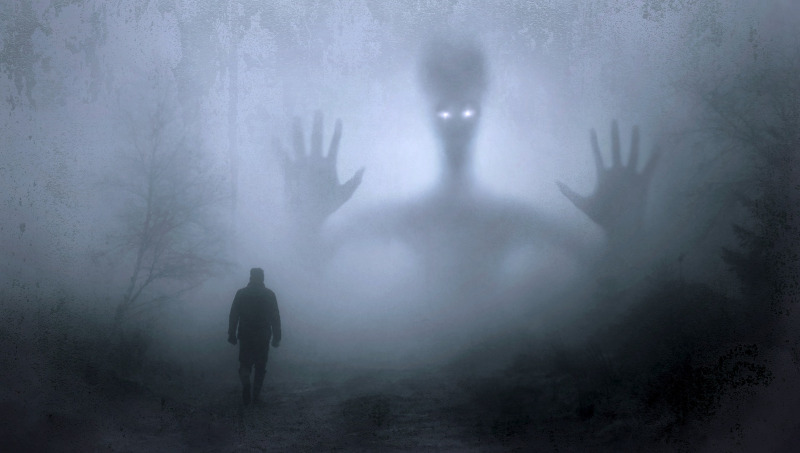 Positive Symbolism of Spiders in Dreams

There are several positive interpretations about seeing spiders in your dreams. These are often related to their characteristics.

Weavers: Spiders circularly connects webs starting from the center. They connect threads one with another to form the entire structure.

Craftiness: Since spiders are able to construct the web, they got this interpretation.

Creativity: The spider web is a piece of art, which needs a lot of vision and imagination before the built.

Oneself: A spiders web art makes it unique. The web is a part of itself, a presentation of the spider’s own self.

Tenacity: Making the web is hard work. It must be firm enough to hold the prey, but still smooth enough for spiders to move around freely on the web.

Negative Symbolism of Spiders in Dreams

Like positive meanings, there are also negative interpretations when dreaming about spiders.

Captivity: A spider forms its web to capture food. The houseflies and similar smaller insects get stuck in the web until the spider comes to feast on its.

Evil: You can only imagine how another insect must feel like once it is trapped in a spider’s web and waiting to be eaten. At the moment of the spider’s arrival, it can appear ill to its prey.

Hubris: After making an artistic web the spider rests on the web with excessive pride appreciating its work.

Shadow: The spider completes it an artwork and waits in the dark until its prey falls for the trap.

Cunning: Although the web is an art, it can also be said as a skillful trap. So, it symbolizes a tricky nature.

Cruelty: It feasts on the trapped life by releasing fluids that melt it before it has its way with the prey. Thus, the spider is said to be harsh.

What Dreams About Spiders Mean 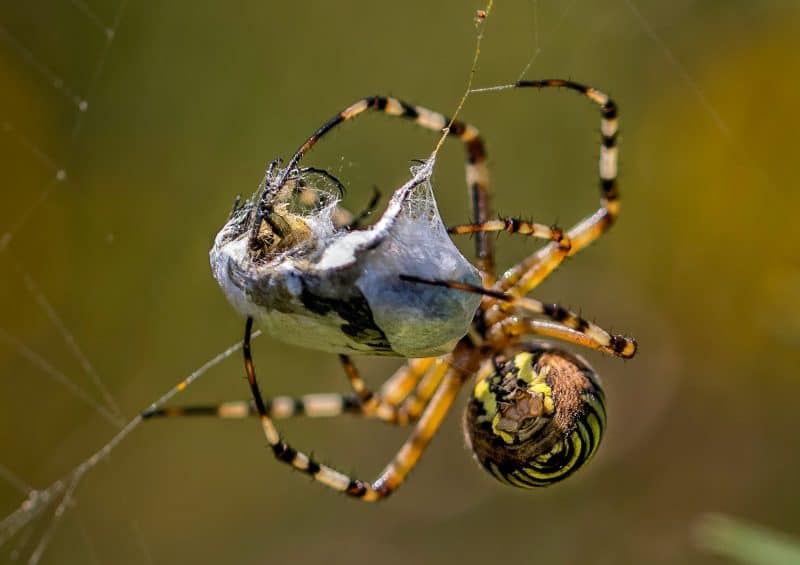 Interpretation of your own feelings

A spider is always around us, but we are unaware of its existence. That is because it is quiet, it moves around silently without making anyone aware of its presence.

Similarly, if a person in real life feels, that his presence is not known to people around him. As it is with the life of a spider, a silent life with few people knowing about his presence or activity. The feeling can lead to the person seeing a spider in his dreams.

You are close to meeting your goal

Sometimes seeing a spider can mean that you are taking steps to achieve your goal. A spider weaves the web patiently. It knows that when it is done with its masterpiece, there will be rewards waiting for it afterward.

The spider slowly weaves toward its goal to achieve a nicely crafted web for itself. Similarly, when a person is taking steps towards his goal, he could dream about the spider.

However, the spider in the dream also has meaning. If you see a spider crawling up the wall, it means you are progressing towards your goal successfully. It means an improvement in both professional and personal life.

On the other hand, if you see the spider is trying to move up, but it faces many hardships, then the meaning is different. As it is in the dream, you are probably facing many obstacles in your pathway to success as well.

A dream where you see a spider could mean threat or insecurity that you need to address. To make it easier to understand, imagine how you would feel like if a spider swings right in front of your from above. You would feel threatened, right?

In your dream, if you see a spider hanging down right in front of your it means the same thing. You probably feel threatened by something in waking life. There is an insecurity in your mind and heart that is yet not solved. It is time that you should take this problem seriously and work on it to deal with your anxiety.

A touch of creativity

As mentioned earlier in the article, spiders represent creativity. The spider web needs both artistic view on a large scale and microscopic detail in the close-up. Hence, the spider is a dream symbol of creativity. If you see a spider in your dream, it could mean you have creativity inside.

The talent is trying to burst out of you. It might also mean that you are about to take a creative adventure soon. If you are seeing a spider in your dream, you can take steps to achieve any creative goal you were dreaming about.

You might dream of a spider that seems harmful to you. It could be a spider crawling over your or a poisonous spider looking to bite you. Any such indication could be an impression of something negative in your life.

You find it difficult to get rid of this negativity. But you need to isolate yourself from it. Drug addiction could also be a good example of this dream interpretation. Since most people ruin their careers and personal lives due to taking drugs.

Spiders weave their crafty web to catch their prey. The web is a trap set by the spider. If you see a web in your dream it could mean manipulation and feeling trapped.

The dream could mean otherwise as well. It could mean that the dreamer is being manipulated by someone in his life. Hence, the dream is an alert to the dreamer to beware of the web and keep himself safe from it.

Another meaning could be the awakening of feminine energy. It can be creativity, receptivity, or patience. Rather than being in connection with a person, it could also mean that your feminine energy is trying to reach out. 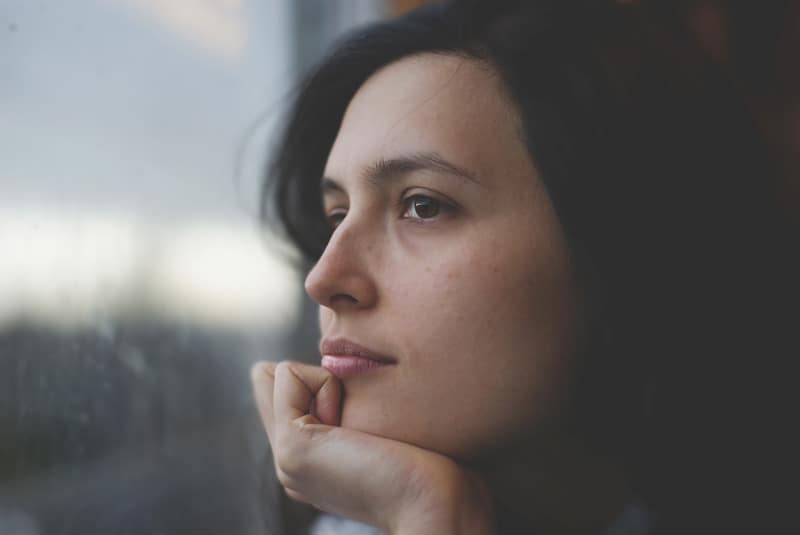 Seeing a spider in a dream can mean a lot of things. To understand your dream, you could try the examples we have given above. Try comparing your dream and see if a similar condition is present in your life. There could be more meaning to seeing a spider in your dream.

To understand your dream better, you need to contact an expert in the matter. You need to find someone who can discuss your dream with you in detail and interpret it accordingly.