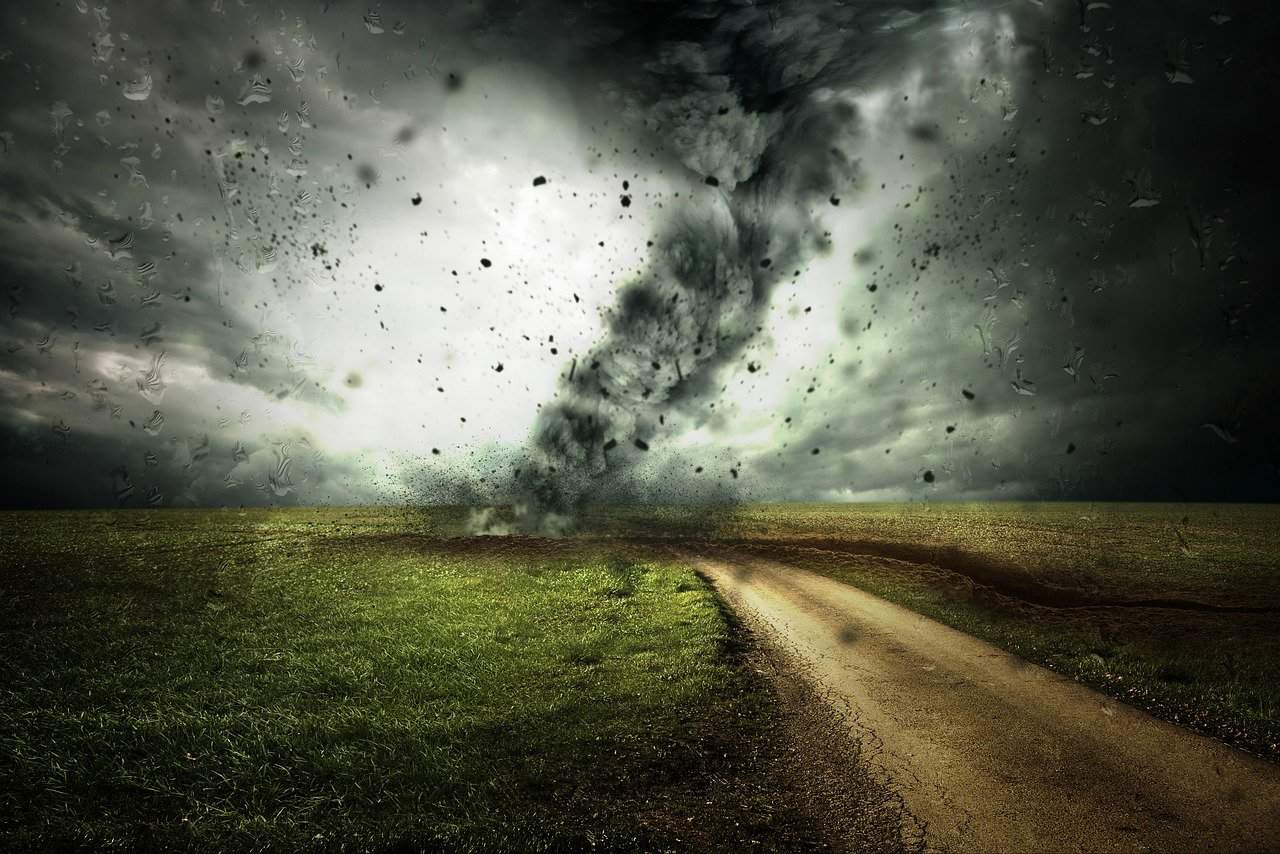 A tornado is intense and destructive. Tornadoes often destroy almost everything in their path, as they travel forward. It’s a natural phenomenon that we can do nothing about. But why do some of us dream about tornadoes? What does dreaming about tornadoes mean?

Tornadoes often appear in dreams as symbols of worries and anxiety damaging the psyche. Despite this, tornadoes can symbolize more than anxiety and worry. It is possible that tornadoes in dreams could also mean an emotional outburst from either you or those around you.

It’s also worth noting that not every tornado dream has the same meaning. Depending on the circumstances, like color or any other inclement weather that combined with the tornado, a dream could be interpreted in more varied ways than basic anxiety, spiraling out of control, or sudden, violent changes in emotions.

What Does it Mean if You Dream About Tornadoes?

Tornadoes are often interpreted as complex dream symbols. It represents your emotions in life, and the swirl of the vortex illustrates your inner emotional state.

Dreaming about a tornado may mean several different things, including disturbances in your life, violence, or overwhelming relationships. In addition, tornado dreams represent unpredictable forces. Forces of this nature are uncontrollable and show up without warning in your life.

Our dreams speak a coded language to us, so a dream about a tornado is highly subjective. Below is a list of some generalized meanings that are associated with tornado dreams in general.

Dream of Being in a Tornado

When you dream of being in a tornado, it means that you are feeling trapped in your emotions, unable to escape. Perhaps you are feeling miserable and depressed. You want to stay positive, but you just can’t seem to get out of the rut that you’re feeling.

Alternatively, this dream may be an indication that your life is being controlled by some outside source. Perhaps you are stuck in an abusive or unhealthy relationship. This dream signifies that someone is causing your life to spiral out of control,

If you are bogged down by too many problems, you might also find yourself dreaming about being inside a tornado. The tornado represents your worries and anxieties over the troubles you’re dealing with. You have a lot to deal with in your life, that they disturb you even in your dreams.

In dreams of multiple tornadoes coming at once, this might indicate that you’re someone who often has mood swings. You are an emotionally volatile person. The tornadoes in your dream represent the different emotions that you quickly shift from one to another.

In addition, the intensity and size of tornadoes will be determined by the issues and stresses in your waking life. If, for instance, you are experiencing many, little things plaguing you, it’s common to dream about many thin, tiny tornadoes. However, if a lot is going on and you feel overwhelmed, then you may see a huge storm or lots of little ones coming at once.

The experience of surviving a tornado in your dream means you will reach new heights in your life. This can mean getting a promotion at work, having a new baby on the way, or a major and positive shift in your waking life. This dream indicates that you are ready for your next milestone.

If you dream that you made it through a tornado, but were injured, it could be a sign that people in your life are hurting you. This can be controlling parents, bad-influence friends, or even an abusive relationship. This dream is your subconscious’ way of telling you that you are stuck in a cycle of hurt that you need to get out of.

The tornado can have a positive meaning if you were caught in its eye and somehow survived, or if a tornado destroyed everything around you but you escaped unscathed. This dream means that you’re making progress in your life. You’re on your way to solving all your problems, and you’re becoming stronger and happier than ever.

Dreams about Tornadoes and Family

When you dream of watching your family being caught up in a tornado may be a sign that you need to pay attention to what’s affecting them in real life. The subconscious mind might be reminding you to pay attention to them because you have been neglecting their wellbeing. This dream tells you to check up on them and make sure that your loved ones are doing alright.

Seeing your family in the middle of a tornado can also be a sign that you need to communicate with them better in life. Perhaps you had a fight with your mom or dad, and have stopped talking to them. This dream tells you to be the bigger person, to pick up the phone, or much better, visit them, and talk to them.

If you dream about a scenario in which you are locked in your basement and waiting for a tornado to strike while hearing a tornado warning siren in the distance, it means you are someone who constantly worries or prepares yourself for something that is unlikely to happen in the long run. If you have been diagnosed with an anxiety disorder, or someone that just worries a lot, it’s common to have this dream.

Additionally, being in the basement during the tornado warning signifies that you are prepared for whatever changes are about to come your way. A major change is happening in the future. This can either be positive or negative, like losing a job or a new baby on the way. Whatever the change may be, this dream is your subconscious communicating with you that you are ready to face whatever lies ahead, perhaps more so than you think.

If you dream about tornado warnings released by someone else then you will likely go through a tough time with little time to prepare. It may be a warning that you will be fired from your job. It could also be a warning that a boyfriend or girlfriend is going to break up with you.

If you see a tornado in your dream from a distance, this can indicate that a new challenge will be coming up soon or that you will start a new relationship soon. It is also possible for a dream about a tornado to have a different meaning based on the gender of the dreamer.

If you dreamed of watching powerful tornadoes and you’re a man, it may indicate that you have some problems or conflicts at work. Perhaps you had a fight with a co-worker, or your boss is busting your chops. These troubles at work manifest as a tornado in your dream.

Women, on the other hand, often dream of tornadoes when there is a conflict or disagreement within their relationship. It can be that you had a fight with your partner and that manifests in your dream. Furthermore, studies have shown that pregnant women are more likely to dream about tornadoes. In this case, if you’re a woman, it can also mean that you may be pregnant in real life.

Dreams About Being Trapped in a Car with Tornadoes

When you find yourself trapped in your car during a tornado in your dream, you’re feeling vulnerable and unprepared. This can mean that you’re going through something in your life. Perhaps there’s a new baby on the way, and you don’t feel you’re ready to become a parent. Perhaps you’re starting a new relationship, and you feel fragile because you carry emotional baggage from your past.

If you dream of being trapped in your car while a tornado strikes outside, the dream may indicate the lack of clarity you are experiencing with something that’s troubling you. Perhaps you had a disagreement with a loved one. This dream tells you to think deeply about that disagreement for you may have missed the point your loved one was trying to make.

Dream a Tornado is Carrying You

Usually, when people dream of tornadoes, they awaken before the tornado reaches them. If, however, the tornado swallows you, then this is likely your subconscious telling you something grave and very serious.

Dreaming of being carried away by a tornado can also speak of your fear of death and dying. If you always find yourself worrying about death, it can manifest itself in different ways, like a scary tornado sweeping you off the ground and thrusting you into the sky.

Dreams of Tornadoes and Saving Someone

Trying to help someone out of harm’s way during a tornado signifies that you need to evaluate your relationship. Your mind is telling you to look deeper into your relationship, and figure out if you have nagging feelings about this person that are troubling you.

You may dream of rescuing your child from a tornado if you are concerned about what your child might be experiencing in real life. You might be worried about your child getting bullied at school, or failing academically. Your tornado dream speaks of your worries over your child, and your need to protect them.

Dreaming About Being Chased by a Tornado

A tornado chasing you in a dream means someone in your life is being mean to you. If you have no clue why their anger is directed at you, this dream tells you to talk to this person, and find out what you did to warrant such anger from them.

Having dreams about tornadoes chasing you and you’re running away from them may indicate someone is being aggressive towards you in your waking life. No matter what their intentions are, it’s best to avoid them as much as you can, and don’t give in to your strong emotions. The best way to deal with situations like this is to keep calm.

link to What Does It Mean When You Dream About a Hummingbird?

The hummingbird is an interesting dream symbol that represents good luck and good fortune. While its quick motions are fascinating to watch, hummingbirds are symbols of love, grace, and cheerfulness....

Continue Reading
link to What Does Smelling Body Odor in a Dream Mean?

You may have dreamed that you smelled something funky. A funky smell can ruin any dream. So what does it mean to dream of smelling body odor? You are seeking acceptance and affection when you...